"Death has been swallowed up in victory...Thanks be to GOD, who gives us the victory through our Lord Jesus Christ. Therefore, my beloved, be steadfast, immovable, always excelling in the work of the Lord, because you know that in the Lord your labor is not in vain." 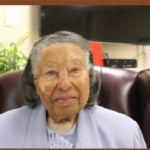 The extraordinary life and legacy of Ruth Naomi Wilson Thomas began on February 15, 1921 in Lynchburg, South Carolina. She was the eldest of four children born to Claude and Maggie Wilson. Ruth grew up on the family farm as an active member of the Presbyterian Church. She received her B.C. degree in Home Economics from Barber-Scotia Junior College in Concord, North Carolina. A born educator, Mrs. Thomas began her teaching career in 1943 and continued to positively impact lives and share her knowledge and wisdom for many years.

Ruth met her husband, James Samuel Thomas when she was in high school and he was in college. They shared a "beautiful friendship" that led to holy matrimony in 1945.  She and her "Sammye" moved to Atlanta to begin a blessed union that lasted for 65 years.  Four loving daughters would complete the family.

In 1951, Mrs. Thomas enrolled in graduate classes at Cornell while her husband pursued his Ph.D. degree.  The family moved to Nashville in 1953 when he accepted a position with the Methodist church. In addition to raising their daughters, teaching, and supporting her husband's career decision, Ruth was very active in community, church, and youth programs during their time in Nashville, which was witness to great upheaval in civil rights and race relations.

1964, Rev. Dr. James Thomas was elected Bishop of the United Methodist Church and made church history with his assignment to the previously all-white conference of Iowa.  Mrs. Thomas' spirit was crucial to the family adjustment to the entirely-different culture, race, demographics, and climate of Iowa after a lifetime in the Black South.  She helped instill in her children "the folly of prejudice, and the beauty of diversity" - most importantly, about the power of the human spirit.  Her consummate grace and poise soon became known throughout the state, bringing her great admiration and quieting the voices that might otherwise rally against her presence in the episcopal residence.  As a team, Bishop and Mrs. Thomas established themselves in their roles with great faith, integrity, and accessibility.  At the end of the then-maximum stay of eight years in one episcopal area, Iowa laypeople successfully campaigned to retain them for yet another four-year term.  In 1976, Bishop Thomas was appointed to the East Ohio area, where they worked hand-in-hand in their assignment until they retired from the episcopacy in 1988.

As the wife and partner of the bishop (and in her own right), Mrs. Thomas balanced speaking engagements, conferences, world travel, spiritual retreats, hosting of events, and many other activities with motherhood.  She did so with profound grace and apparent ease.  In "retirement," Mrs. Thomas remained active in United Methodist and community programs while her husband taught at Southern Methodist University in Dallas (1988-1992) and Emory University in Atlanta (1992-1996).  They joined the Cascade family in August 1995.  She wholeheartedly supported the mission and vision of CUMC; especially the United Methodist Women, and Christian Education.  A woman of noble character, she continued to eloquently share her knowledge and wisdom with participants in the noon-day Bible Study class.  They were blessed by her mere presence.

Ruth Thomas exuded love, joy, generosity, compassion and so many wonderful qualities!  She was quietly brave and deeply compassionate.  At age 52, she signed up for a YMCA class for the "Terribly Terrified of the Water," and then graduated to the Life Saving Class.  As a certified life guard, she eagerly volunteered to work with the Y's program for non-ambulatory children.  This is one of the countless examples of her overcoming a personal challenge for the express purpose of helping others.  At age 95, she continued to drive herself to worship at Cascade UMC, tithe, intentionally greet each pastor at the end of service, and encourage others.

Condolences may be sent to the following addresses: